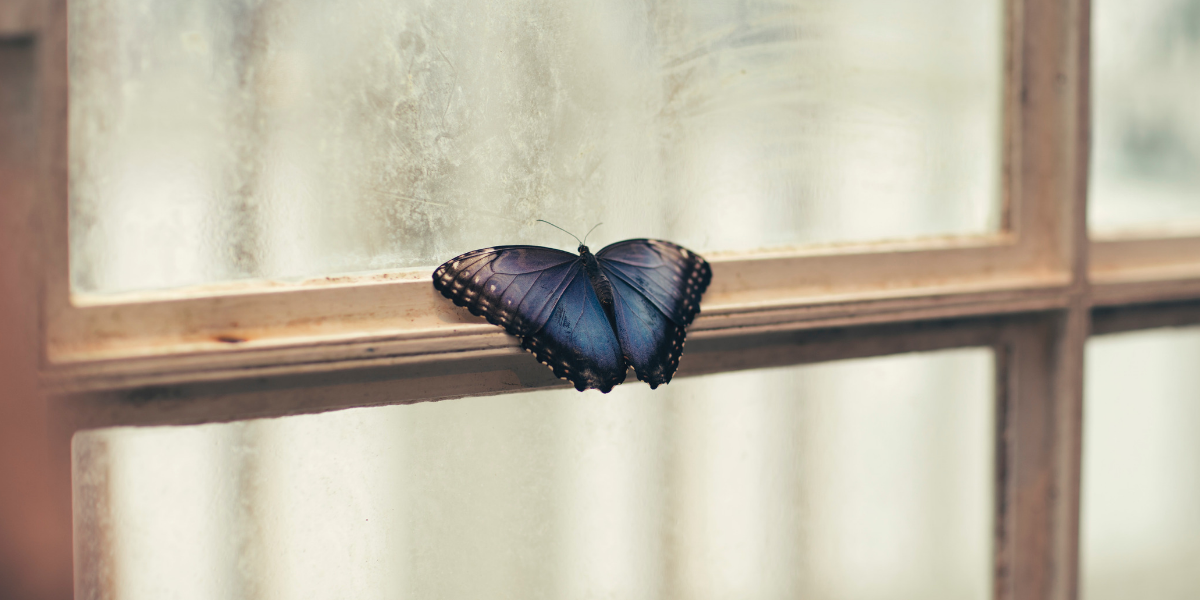 The Frustration Trap: How to Break the Vicious Cycle that Stalls Your Progress

A chronic inefficiency, an injustice, paralysing bureaucracy, finger-pointing or scapegoating: these are just a few examples from a potentially endless list of things that get under our skin at work.

The exponential changes we face in the world today make it increasingly more challenging to make work… work. We get frustrated because of things at work that don’t allow us to fulfil our needs and make progress as fast as we’d like to.

But here is the thing about frustration:

Frustration doesn’t always deserve the bad rap that it has.

Born out of frustration, powered by action.

Think of your own experiences and you will realise that that the trigger for most positive changes in the workplace is the same as the reason why an oyster makes a pearl – sheer irritation.

If nothing bugs us, if nothing stands in the way or annoys the hell out of us, we rarely feel compelled to challenge the status quo.

We rely on these small (or big) “irritants” to rub us the wrong way – they help us spring into action and make a difference.

But not every grain of sand makes a pearl and not every frustration makes a positive impact on our workplace.

Whether a frustration will have a positive or negative impact largely depends on how healthy your team’s or company’s culture is.

In healthy cultures, when people notice – or anticipate – a problem, they face the issue head-on. They seek to find root causes, brainstorm solutions, identify those that can be implemented successfully, experiment, and learn as they go.

Healthy cultures course-correct and evolve so that they can effectively serve their team’s or company’s mission and vision. There’s a sense of engagement, a solution-focused approach and commitment to make things work.

The bottom line is this:

Healthy cultures use frustration as fuel for growth and progress.

However, in some teams, inertia sets in and too many problems go unaddressed for way too long.

As a result, frustration builds up. It becomes chronic and omnipresent – causing teams to fall into what I call “the frustration trap.”

The frustration trap is a horrible place to get stuck in.

If you’re on a team or in an organisation that has fallen into it, you will recognise the symptoms:

You wake up in the morning with a pit in your stomach. Even before you get dressed for work, you know that you’ll end up doing unfulfilling work. It will be a waste of everyone’s time and energy. And to make it worse – you feel that nothing will ever change.

Facing challenges at work always generates a form of energy. But when teams find themselves in the frustration trap, this energy stops flowing in the right direction. It no longer goes into problem-solving.

Instead of powering positive change, it gets trapped, spinning into a vicious cycle, breaking people’s spirit and draining their energy.

The frustration trap is a vicious cycle of unaddressed problems, chronic frustration and learned helplessness. 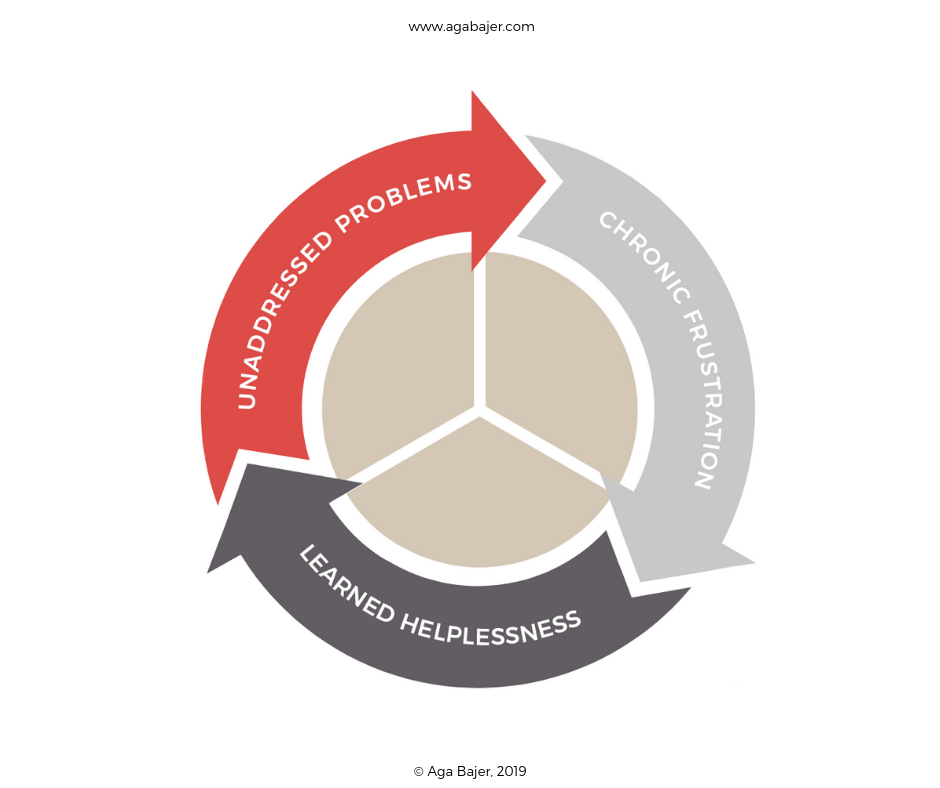 When we fail to address problems for too long, they inevitably lead to chronic frustration. This, in turn, results in what psychologists call “learned helplessness.” It’s a belief that we have no agency, no power to change our circumstances. Learned helplessness leads to apathy and it exponentially increases the number of unaddressed problems your team and organisation is facing. And so the vicious cycle continues.

Because misery loves company, ironically, the frustration trap binds people together and gives them a sense of belonging. Like prisoners of war, they stick together, often developing a cultural Stockholm syndrome and becoming psychologically dependent on frustration as a survival mechanism.

If the frustration trap had a manifesto, it would probably look something like this: 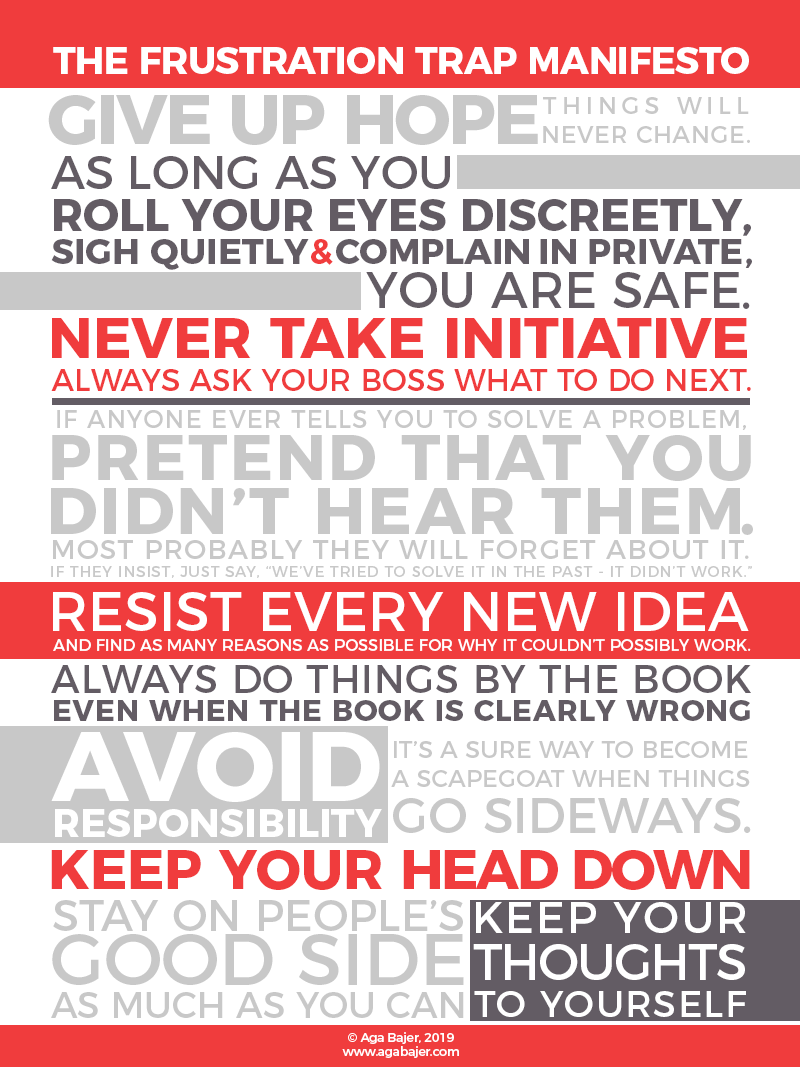 The frustration trap can be deadly for your team culture – it leads to inertia, defensiveness, aggression, avoidance of responsibility, complacency and… diminishing hope that something will ever change. But worst of all – it stalls your progress and kills your team’s morale.

If you recognise any of the symptoms, it’s time to think about how to break the vicious cycle and get back on track.

Not surprisingly, the vicious cycle of unaddressed problems, chronic frustration, and learned helplessness can be very hard to break.

Here are two steps that can help:

First, seek to understand what’s really going on. Tackling recurring patterns of behaviour, such as the ones in the frustration trap, requires a good map of the terrain. Here’s what you can do to help your team become aware of and to understand your circumstances better:

Exploring and understanding the dynamics and mechanics of the frustration trap will require a lot of dialogue and openness. You might have to learn how to read in between the lines and you will definitely need to take measures to create psychological safety for people to open up. Be prepared to challenge assumptions and shed light on deeply rooted, unconscious beliefs.

Second, set your people up for success. The surest way to avoid frustration is to redefine success. Instead of defining success as problem elimination, aim at carrying out successful experiments. A successful experiment is not the one that produces a solution to a problem from the first go – it’s one that helps your team identify what works or what doesn’t work in the specific case and share this learning with others. Its ultimate objective is to help the team learn (so that it can eventually solve problems!). Experimenting this way takes away a lot of pressure and helps people build up their confidence. This will eventually lead to overcoming learned helplessness and breaking free from the frustration trap.