BEYOND THE STARTUP MYTH with Ethan Mollick

You probably have a vivid picture in your head – two supercharged recent college graduates bursting out of the gate with a fresh new idea that hits them like a lightning bolt, gets massive funding, and leads to a product launch that is an astounding success.

Facebook, Google, Microsoft, Twitter, or Apple – these are the companies we know and tend to think about when asked about entrepreneurial stories. The legendary unicorns, with valuations of over 1 bln.

The only problem? The stories we tend to think about are stories of outliers. Research shows that the majority of successful founders look and behave very differently.

My guest today is Ethan Mollick, an award-winning researcher at Wharton and the author of a new book, THE UNICORN’S SHADOW: Combating the Dangerous Myths that Hold Back Startups, Founders, and Investors.

His mission is to democratize entrepreneurship.

In this wide-ranging conversation, we talk about what’s a myth and what is true in the world of startups.

Here are some of the topics we discussed in this conversation: 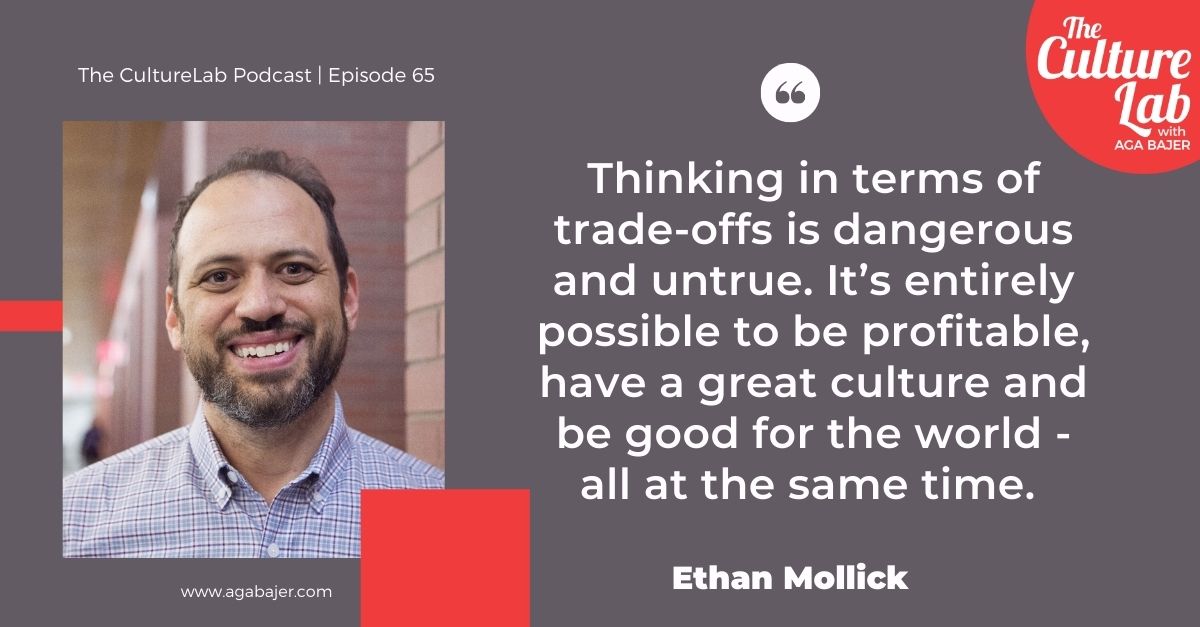 More Myth-Busting from THE UNICORN’S SHADOW

Myth: more successful start-ups are founded by teams rather than solo entrepreneurs. In fact, startups run by solo founders can actually perform better than co-founded companies. One study shows that the odds of running an ongoing for-profit venture are more than twice as high for solo founders as opposed to teams. Surprisingly, the most successful founding team relationship was family; family-funded companies have proven in the latest research to have the highest survival rates.

Myth: Most successful venture capitalists have an innate sense of what ideas will succeed. In fact, many of the VCs who founded an unexpected hit, like identifying Facebook or Uber as great investments before anyone else did, became incredibly popular for their “special insight” but never got lucky again. They are voting with their gut as much as anyone.

Myth: A successful startup is one that grows quickly. In truth, growing too fast or growing in the wrong way leads to the downfall of many founders.

Myth: The most successful founders are reachable constantly and rarely sleep. Research shows that startups perform much better if “crunch times” involving round-the-clock work are the exception rather than the rule. The work/life balance of successful founders is more sane than most people think, and yet brilliant ideas are often left on the drawing table because the would-be entrepreneurs have families, or other responsibilities they know will not allow them to dedicate 24/7 to their ideas.

Myth: There is such a thing as the perfect pitch. In fact, the passionate entrepreneur delivering a brilliant and visionary pitch to an audience of professional investors is likely to lose to a more boring, more organized speech. The most influential technology pitch of all time starting with the following stirring words:

“The research program that I’m going to describe to you is quickly characterizable by saying, if in your office, you as an intellectual worker were supplied with a computer display, backed up by a computer that was alive for you all day and was instantly responsible…responsive…instantly responsive to every action you had, how much value could you derive from that?”

[Douglas Engelbart’s Mother of All Demos in 1968, which introduced the computer mouse, windows interfaces, computer graphics, videoconferencing, and basically every other element of model computing.]

Ethan Mollick is an associate professor at The Wharton School of the University of Pennsylvania, where he studies and teaches innovation and entrepreneurship, with a special emphasis on how to give everyone more opportunities to be innovative and entrepreneurial.

Mollick’s papers have been published in top management journals and have won best paper awards from multiple divisions of the Academy of Management. His published work on crowdfunding is the most cited paper on management published in the last five years. He and his research have also been featured on CNBC and in the Wall Street Journal, the New York Times, the Washington Post, the Economist, Forbes, Inc, and other outlets. Prior to his time in academia, he co-founded a startup company, and he advises many others.

As the Academic Director and co-founder of Wharton Interactive, Mollick is working to transform entrepreneurship education using games and simulations. He has had a long interest in using games for teaching and co-authored Changing the Game, a book on the intersection between video games and business, that was named one of the American Library Association’s top 10 business books of the year.

He has built numerous teaching games, used by tens of thousands of students around the world, and is on the verge of launching gaming software that will be like Dungeons & Dragons for managers or a flight simulator for start-ups (complete with realistic obstacles like angry customer emails, distribution snafus, and tricky correspondence with lawyers).

Books Mentioned in this episode

The Founder’s Dilemmas: Anticipating and Avoiding the Pitfalls That Can Sink a Startup by Noam Wasserman