How Minds Change with David McCraney 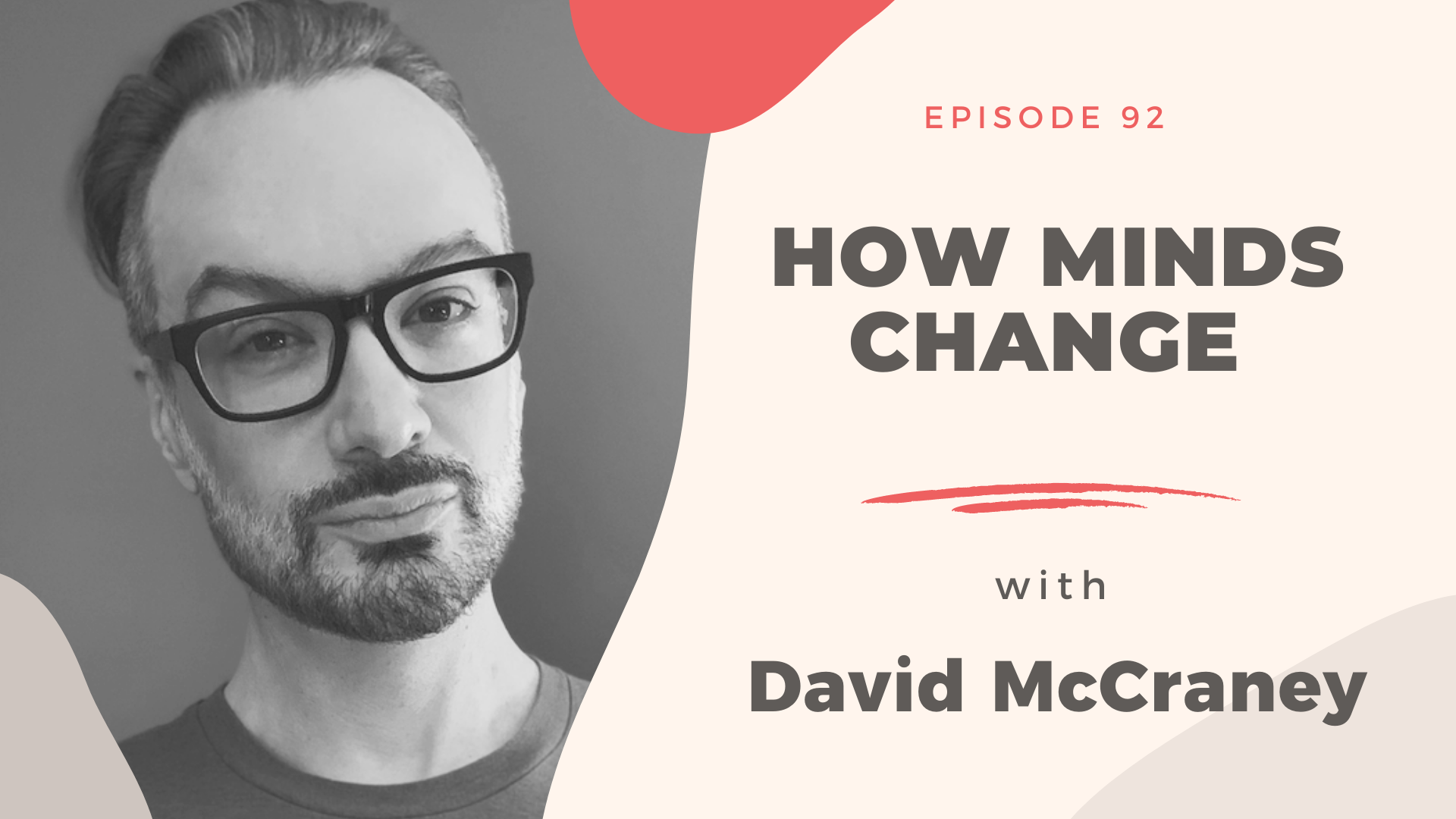 Have you ever felt frustrated by the fact that people tend to stick to their guns, even when presented with indisputable evidence that their beliefs are completely unfounded or plain wrong?

It turns out there is a very good reason why this happens. Psychologists call it the backfire effect. It makes us dig our heels deeper when presented with evidence that disproves what we hold as truth.

The backfire effect and a number of other well known psychological processes such as motivated reasoning turned my guest, David McCraney, into a skeptic when it comes to effective persuasion. For a long time, David believed that convincing people to change their deeply held beliefs is not just frustrating but entirely futile.

But then, he got curious about what leads to seemingly sudden changes of public opinion, like the one around same sex marriage. He started researching it and discovered a hidden yet powerful process that made it possible. That discovery changed his mind about the feasibility of changing minds.

In this episode, David and I do a deep dive into the science of practices and methodologies that when used well can lead to significant changes in how people think, feel and act.

Here are some of the questions we answer in our conversation with David:

“You want all the perspectives to be expressed because nobody is entirely right but each perspective has something valuable to add. To get to truth or innovation, you need to create an environment where people’s Venn diagrams overlap”

David McRaney is a science journalist fascinated with brains, minds, and culture.

He created the blog/book/podcast You Are Not So Smart to get a better understanding of self delusion and motivated reasoning, and before that he worked in construction, selling leather coats, and even owned two pet stores for a few years.

He started the blog in 2009, and it became an internationally bestselling book shortly after, now available in 17 languages. It then became a podcast that was once part of Boing Boing. On that podcast he continues to interview scientists who study the psychology of reasoning, decision-making, and judgment. His second book, You Are Now Less Dumb, was released in 2013, and his third book, How Minds Change was released in June of 2022.

He has been an editor, photographer, voiceover artist, television host, journalism teacher, lecturer, and tornado survivor. He also worked for several years as the head of digital media for WDAM-TV where he produced The Green Couch Sessions, a TV show about the music of the Deep South. He’s done some commercial work as well, writing for Heineken, Duck Tape, and a few others. He recently appeared in a Reebok ad that I also helped write.

Most recently, after finishing How Minds Change, he wrote, produced, and recorded a six-hour audio documentary exploring the history of the idea and the word: genius.

The Invisible Gorilla by by Christopher Chabris and Daniel Simons

How Minds Change by David McRaney

The Enigma of Reason by Dan Sperber and Hugo Mercier

You Are Not So Smart by David McRaney

You Are Not So Smart blog and podcast