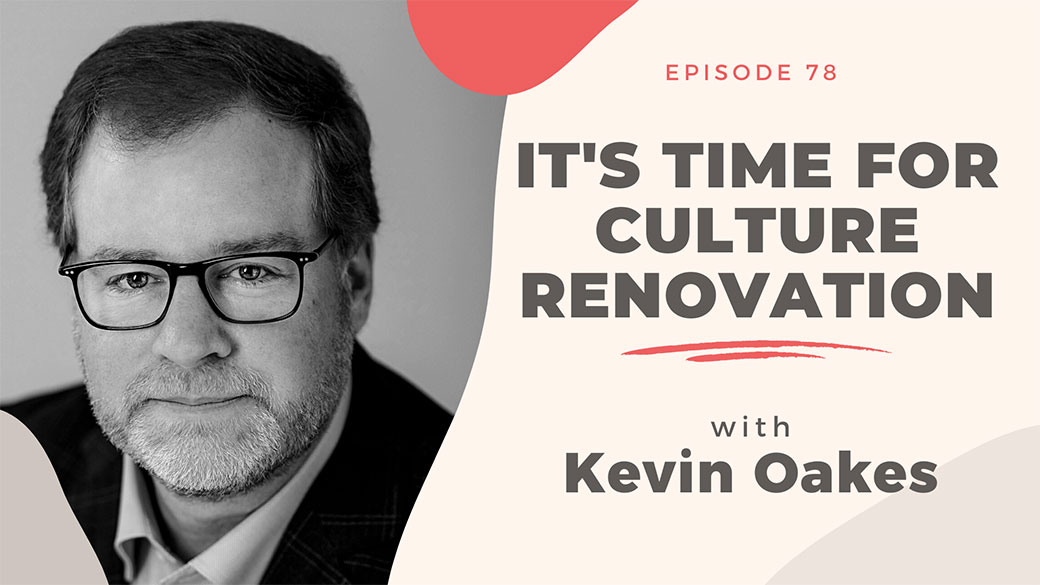 And yet, when we try to change culture intentionally and methodically, it proves difficult. Research indicates that almost every corporate culture change effort fails.

So what can we learn from the well-documented exceptions – companies that have successfully evolved their cultures – like Microsoft, 3M, Mastercard, or T-Mobile?

This is the question that Kevin Oakes, CEO, and co-founder of the Institute for Corporate Productivity, has been asking for decades.

In this episode, he shares his research into company culture and what he’s learned about culture change. His findings are presented in his recent book, Culture Renovation: 18 Leadership Actions to Build an Unshakeable Company.

Here are some of the highlights from this episode:

Kevin is CEO and co-founder of the Institute for Corporate Productivity (i4cp), the world’s leading human capital research firm focusing on people practices that drive high performance. i4cp conducts more research in the field of HR than any other organization on the planet, highlighting next practices that organizations and HR executives should consider adopting.

Kevin is also the author of Culture Renovation™, an Amazon bestseller and the #1 new release in a dozen Amazon book categories.  Drawing on data from one of the largest studies ever conducted on corporate culture, Culture Renovation™ details how high-performance organizations such as Microsoft, T-Mobile, 3M, AbbVie, Mastercard, and many more have successfully changed organizational culture.

Kevin is currently on the board of Performitiv, and on the advisory boards of Guild Education, EdCast, and Sanctuary.  Kevin was previously on the board of directors of KnowledgeAdvisors, a provider of human capital analytics software, which was purchased by Corporate Executive Board in March of 2014.  Kevin was also the Chairman of Jambok, a social learning start-up company which was founded at Sun Microsystems and was purchased by SuccessFactors in March 2011.  Additionally, Kevin served on the boards of Workforce Insight and Koru prior to their sales.

Kevin is on the board of Best Buddies Washington and helped establish the first office for Best Buddies in the state in 2019.  Best Buddies is a nonprofit organization dedicated to establishing a global volunteer movement that creates opportunities for one-to-one friendships, integrated employment, leadership development, and inclusive living for people with intellectual and developmental disabilities (IDD).

Kevin was previously the Founder and the President of SumTotal Systems (NASDAQ: SUMT) which he helped create in 2003 by merging Click2learn (NASDAQ: CLKS) with Docent (NASDAQ: DCNT). The merger won Frost & Sullivan’s Competitive Strategy Award in 2004.

Hit Refresh: The Quest to Rediscover Microsoft’s Soul and Imagine a Better Future for Everyone by Satya Nadella , Greg Shaw

Super Pumped: The Battle for Uber by Mike Isaac

Culture Instant Assessment: a 10 question/2 minute mini-assessment to understand your organization’s readiness and maturity level on your culture renovation journey