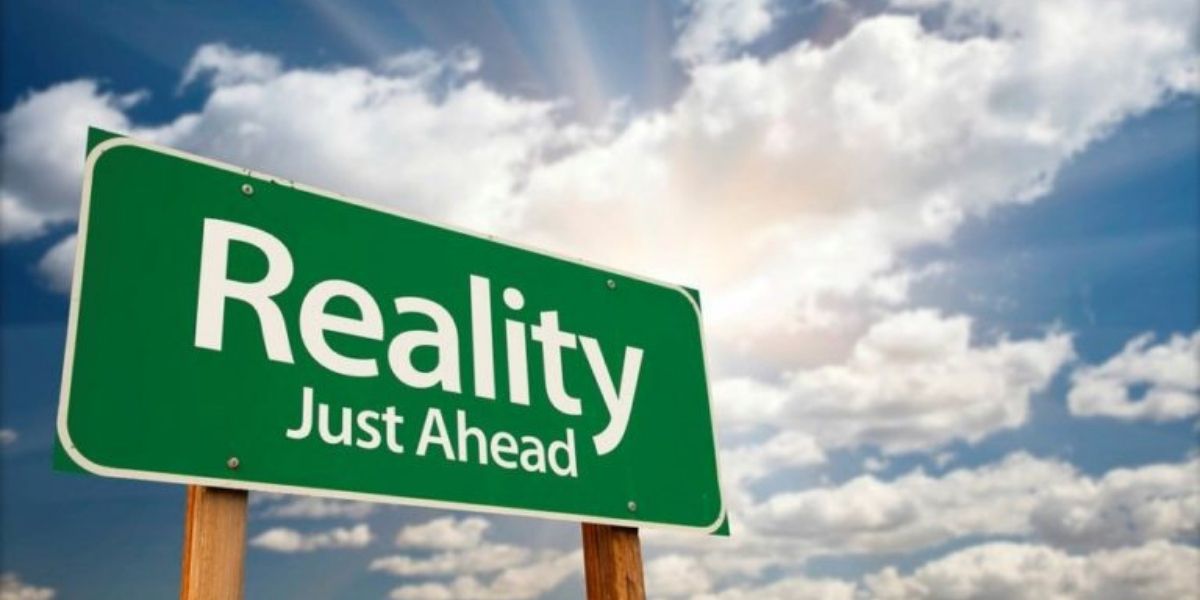 The Real Reasons Why Most Culture Change Efforts Fail

When asked about their workplace culture, a vast majority of employees today say that it needs to change, fast.

The Katzenbach Center’s 2018 Global Culture Survey indicates that 80 percent of employees are disappointed with their company culture. The same study reveals that 65 percent of the respondents consider culture to be more critical for their success than strategy or the operating model.

Based on these statistics, it would be perfectly logical to assume that employees must suffer many sleepless nights, obsessing about how to make their culture better. So why don’t they?

The Fairytale Land versus the Real World

The main reason why most people don’t obsess about making their culture better is that they inhabit the Real World. Most culture change programs, on the other hand, are designed with the Fairytale Land in mind.

In the Fairytale Land, people are driven entirely by logic, ethics, and noble intentions. It’s where time for worthy pursuits is unlimited and where everyone wakes up in the morning asking themselves which of the world’s biggest problems should they tackle before breakfast.

Culture is at the top of everyone’s agenda. People eagerly anticipate their morning team huddles, where they get to recite the corporate values and talk about their biggest failures to promote growth and learning.

In the Real World, on the other hand, people wake up hoping they haven’t run out of milk and that the dog won’t take too long to poo; otherwise, they will be late for work – again.

The real world is messy, ambiguous, complicated, and overwhelming. People worry about their bonuses or promotions. They are consumed by thoughts about how to meet their budget, avoid looking stupid in front of the boss, and beat traffic on their way home.

Culture rarely – if ever – crosses anyone’s mind in the Real World. 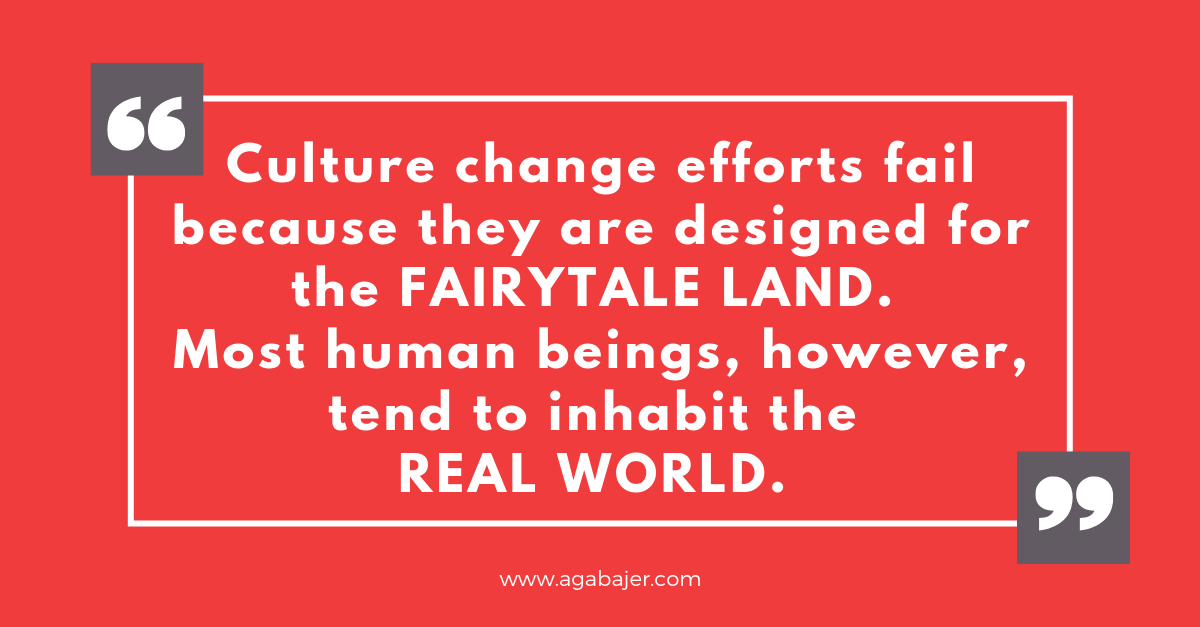 Evolving culture in Real World companies is much trickier than the consultants with shiny briefcases and the enthusiastic Chief Culture Officers would like you to believe. It’s mainly because the Real World employees experience obstacles that the Fairytale Land employees don’t. These obstacles are the reasons why most culture change efforts fail.

Here are the three most common ones:

In his book Life, the Universe and Everything, Douglas Adams introduces the idea of an “SEP field.” A character in his novel, Ford Prefect describes it this way:

A SEP is something we can’t see, or don’t see, or our brain doesn’t let us see, because we think that it’s somebody else’s problem. That’s what SEP means. Somebody Else’s Problem. The brain just edits it out, it’s like a blind spot. The Somebody Else’s Problem field… relies on people’s natural predisposition not to see anything they don’t want to, weren’t expecting, or can’t explain.

There’s a psychological term for a SEP field: the bystander effect. When people witness a fire, a mugging, or a dysfunctional culture, they choose to believe that someone else should have the situation under control.
In the Real World, people often tell themselves: “Someone else is probably calling the fire department, the police, or the HR, so let me focus on my priorities instead.”

How to reduce the pull of an SEP field

To be successful in evolving culture in the Real World, you need to shift the way people view culture in their teams or their companies. You’ll need to turn SEP into MEP (My Essential Problem).

A cultural problem becomes an MEP only when it’s viewed through the lens of a Real World business problem that is deeply relevant to each individual. For example: “We lost sales to our competitor because their customer service was much better. I need to recover my sales, and I’ll do it by improving my team’s service.”

Even if you manage to turn the way people view culture from SEP to MEP, it can still feel like an overwhelming task.

Improving service and cultivating what many companies refer to as a “customer service culture” could take any shape or form. Where do you even start?

And this is where you encounter another Real World problem. Human beings are not wired to thrive when faced with endless choices, decisions, and complexity. We do best when we have limited options and a very clear focus.

How to overcome the overwhelm factor

One of the reasons why so many culture change efforts fail is that they start with a long list of cultural “priorities” that encompass the whole organization.

To overcome the overwhelm factor, we need to identify ONE (yes, just one!) keystone behavior to start from. A keystone behavior is a behavior that centers all energy and paves the way to other significant changes and that will help people get used to a different way of operating. A client of mine was recently facing shrinking profit margins. After analyzing the situation in one of the teams, we identified that the keystone behavior for that particular team. It was asking colleagues (and bosses): “What could a better and more cost-effective way of doing this look like?” This one behavior contributed to a 47 percent decrease in operating costs for that team and a 130 percent increase in productivity during a six-month period. It also successfully challenged the cultural norm of: “Why fix something if it’s is not broken?” and “Don’t confront your boss.”

The problem with common culture change interventions is that they are rarely pleasurable and offer the Real World employees very little in return.

How to make the instant gratification bias work for you, not against you

To make culture change work in the Real World, you need to make evolving culture fun. You also need to demonstrate the results early and frequently and reward people in the short-term.

There would be no point for my client to encourage people to ask the question: “What could a better and more cost-effective way of doing this look like?” if they were not prepared to keep track of great ideas that have come up as a result and the impact of those ideas on the bottom line.

The reasons why apathy is the most frequent reaction to culture change efforts are the same as the reasons why global warming, illiteracy, or hunger rarely keep us awake at night. It’s certainly not that we don’t consider these issues important. We do. But most of the time, they seem to be beyond our span of control. They are a bit like the weather. We may occasionally complain or worry about it, but we are rarely “unreasonable” enough to believe that we could do something about it.

The good news is that there is a lot to be gained from being humble enough to see the world as it truly is. It’s only when we understand the Real World that we earn the right to imagine what the world could look like. And that’s how we can become “unreasonable” enough to make real culture change happen.